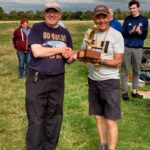 The annual challenge this year was to build a rocket utilising helicopter recovery. Phil Charlesworth’s second flight of 59.44 secs put him well ahead of the opposition for a well deserved win. 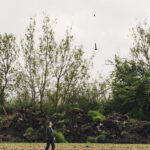 Launching a Cadbury’s Creme Egg took place a month later than usual in May, because of restrictions earlier. Mike Cocker took advantage of an early launch when the thermal activity was strongest and took the prize with a time of 3 mins 58 secs.

The July 2019 meeting was scheduled to happen on the 50th anniversary of the moon landing, 20th July.  Members built and flew scale models of rockets from NASA’s Apollo era, including several Saturn Vs and  a Saturn 1B.

At the Easter meeting in 2019 we had an ad-hoc challenge for lofting a Cadbury’s Creme Egg.    The entrance fee was one Creme Egg with winner takes all.  Mike Cocker achieved the longest flight and left with a nice pile of Creme Eggs, wisely leaving behind the ones damaged in unsuccessful flights. 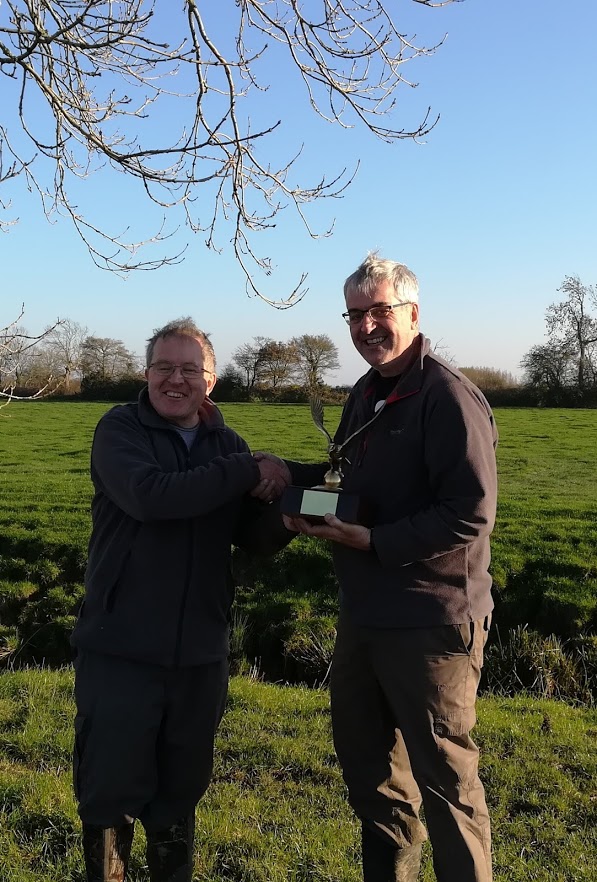 The club challenge for 2018 was to build a rocket that has only one streamer for recovery and launch it at the October meeting.  The one that stayed aloft for the longest was the winner.   Just to add a bit of spice to the challenge everyone was limited to an A impulse motor.

The member who produced the longest flight was Dave Bishop with his scratch-built ‘Cougar’.  No member came near his impressive 47.88 seconds.  The picture shows Dave receiving the FOG Challenge Trophy. 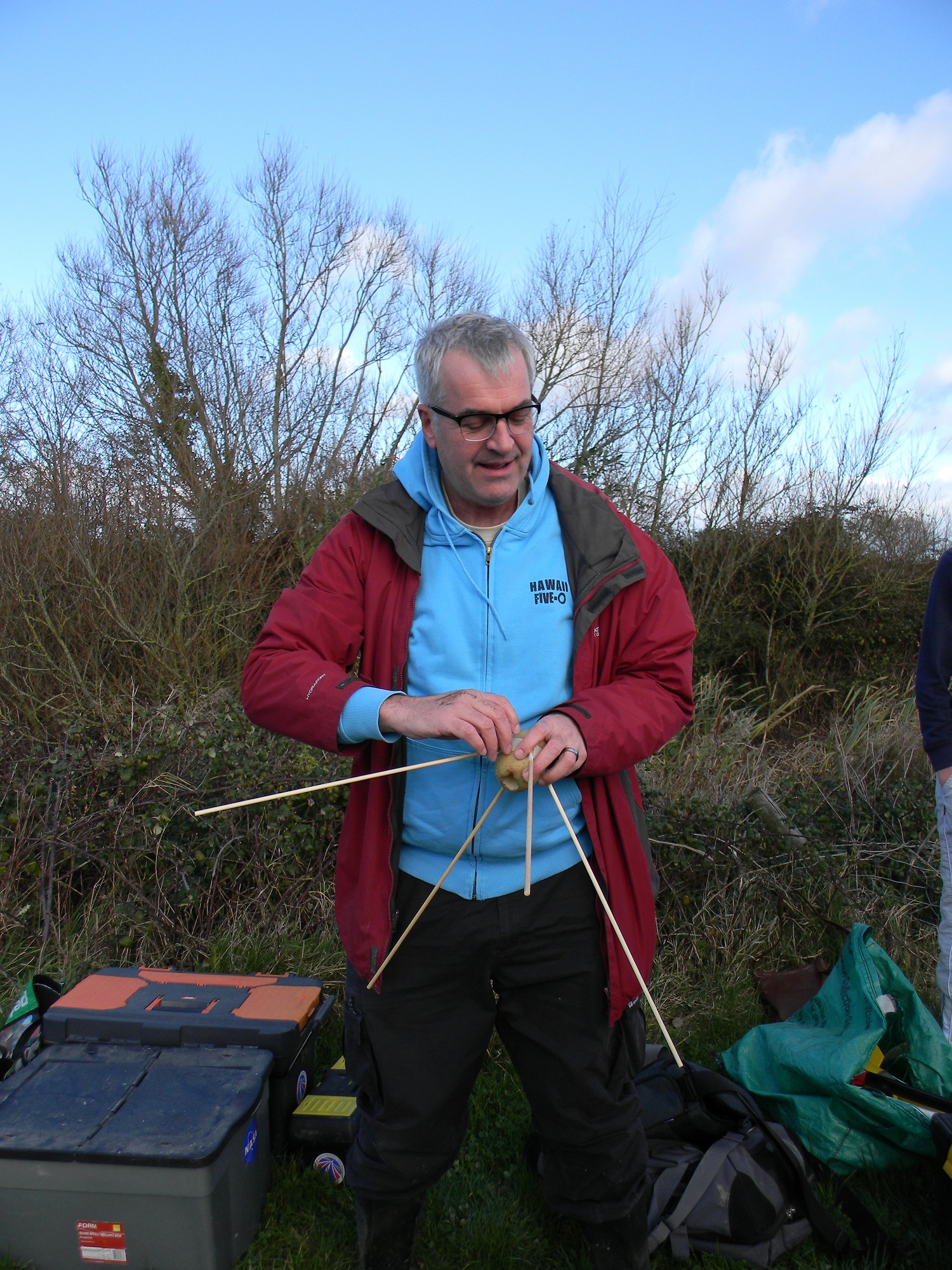 Sputnik 1 was launched on 4th October 1957.  To celebrate the 60th anniversary of its launch FOG members built and launched scale models of Soviet-era rockets.  Dave Bishop took a more liberal interpretation of the brief and made Spudnik. 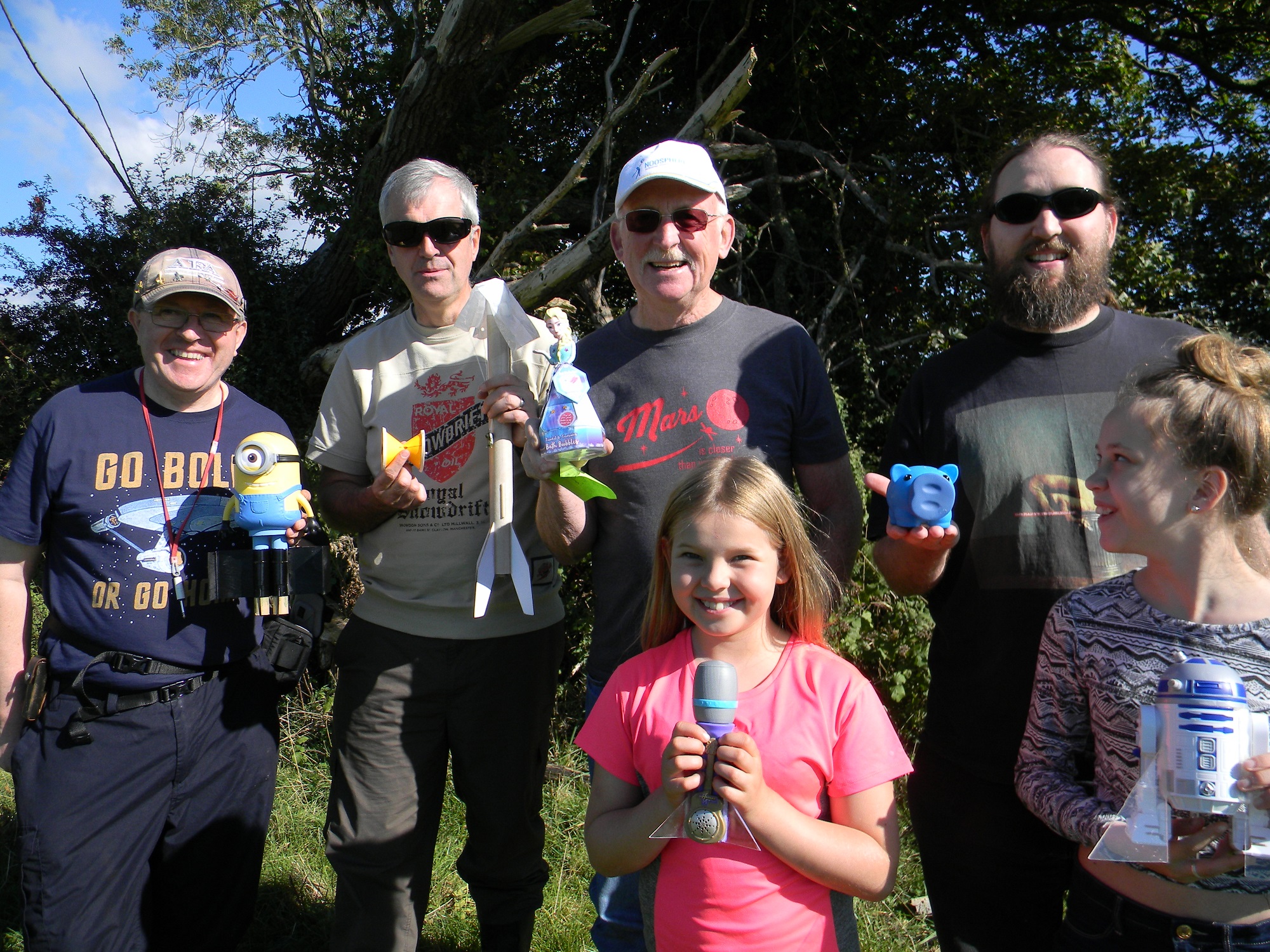 In 2016 club members decided to make toys fly.  We proved that even the most unlikely objects can be turned into rockets.  A doll, a pig, a Barbie microphone, a minion and several other ‘oddrocks’ took flight.

It takes a lot of skill to make a successful oddrock, and it was great to see young and old club members have a go at thus unusual challenge.

Some of the older FOG members were raised on a diet of Supercar, Fireball XL5, Stingray, Captain Scarlet and (of course) Thunderbirds. Gerry died back in 2012, but we remembered him in the 2015 competition. Members built rockets from one of his classic series.

The challenge for 2014 was to build rockets entirely from recycled materials.  The entries showed a lot of ingenuity. Luke found some really good plastic packing material that made really good fins. Mark tried helicopter recovery and found that the tips from Whitworths cake icing sets make really good nosecones. Phil used the cases from 3 Glenfiddich miniatures to make a body tube.

The flights went really well. Mark’s Toblerone Terror started the day with a flight so fast that we all lost it so we couldn’t get a time. Luke went next with his two-stage Wrapper One. Phil’s Whisky Galore went next, but the flight we all wanted to see was Luke’s Saturn V. Five motors roared into life, and it leaped  off the pad in a dead straight boost. It looked good, and flew even better.

The club challenge for 2013 was to build a flying saucer powered by black powder motors and keep it airborne for as long as possible. The only limitation was that the total motor impulse had to be G or below.

As usual, there was a lot of innovation by club members. In fact there was so much innovation that the SFR (successful flight ratio) was less than optimal. Recycling played its part in this year’s competition with parts of Wheatabix packets and lids from Costa Coffee cups being used.

Dave Bishop was the winner with a 14.66 second flight by his Wheatabix box saucer. 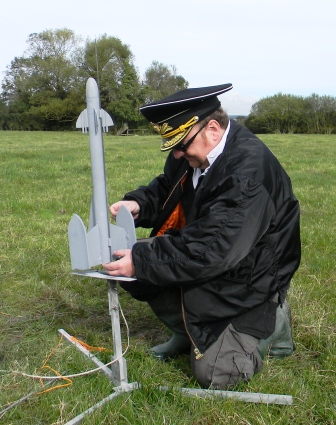 The challenge for 2012 was to build a rocket or spaceship from a science fiction film or TV programme.

The winner was Tom Roberts with his scale model of Fireball XL5.  It brought back many memories for the older club members.

The runner up was Phil Charlesworth with his “Men in Black” flying saucer which was based on the observation towers at the Worlds Fair. 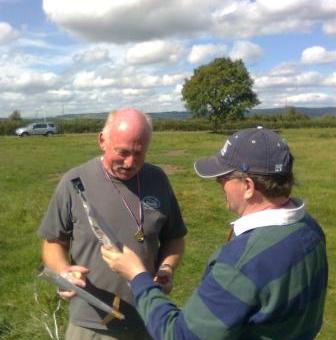 The challenge was to launch a raw egg on a C impulse motor and keep it aloft for as long as possible.  The challenge attracted several good quality entries.  Flights occurred throughout the meeting with scores getting progressively better.

In late afternoon the challenge put beyond reach with a stunning flight by Dave Tranter which set the astonishing score of 1 minute 16.9 seconds. 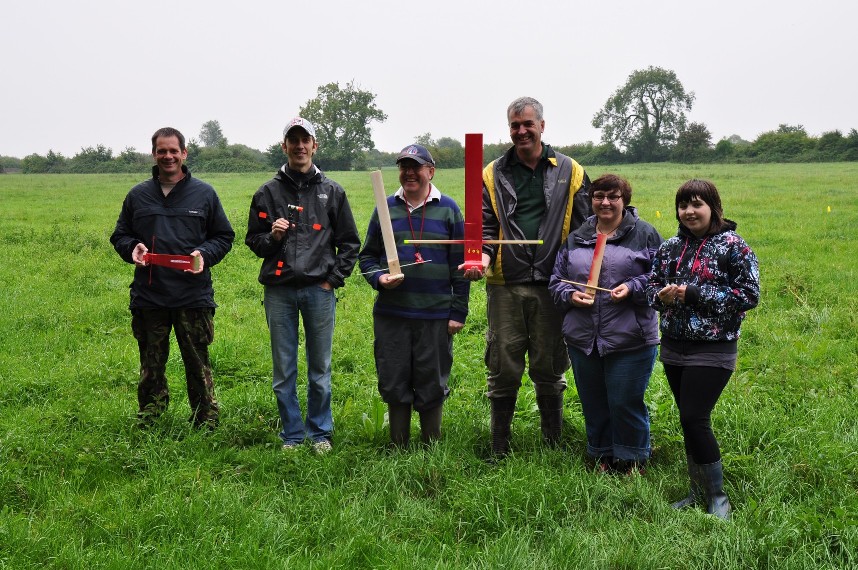 The challenge was to build a BP powered monocopter and keep it airborne for as long as possible.

There were some very original designs.  The lightweight carbon-fibre monocopter performed very well.  Other opted for raw power with D12 clusters, while Phil attempted a staged monocopter.

In the end Dawn Bishop won with a very simple design and a total time of 7.56 seconds.

The first club challenge was to build and fly a rocket from Star Wars at our meeting on 4th May 2009.  Yes, it was Star Wars Day – May the fourth be with you ……

Many thanks to the club members and friends for making this meeting a lot of fun. Highlights of the day were: 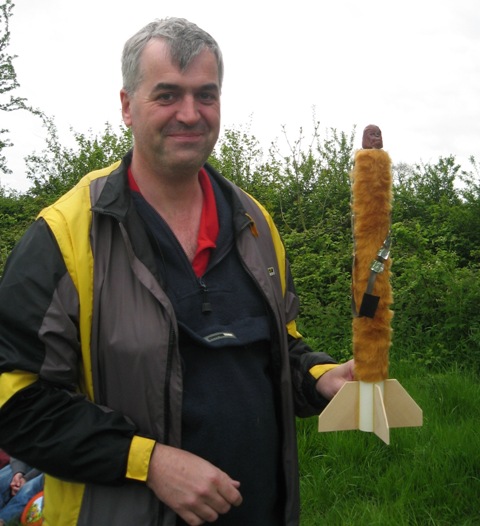 hop winning the prize for the best model. His Wookie won the most votes and flew superbly. No-one else could offer the RSO a chad-staged scratch-built Wookie with a straight face!

– The Batten family for their brilliant clarinet solo of the Star Wars theme, rocket biscuits, great flights, and general sense of fun.
– Tom and Mike’s less than entirely stable fighters. Distance is our friend…..
– Adam’s great R2D2 rocket.
– Vez Charlesworth’s Ewok hat.
– Having lots of visitors from as far away as Devon and Cheshire

A video of the day can be seen HERE.

The Story of Ernie the Eagle

The FOG Annual Challenge trophy has an interesting history. During WW2 many RAF pilots did their basic training in the USA. One of the training schools, number 5 Basic Flying Training School (5BFTS), was at Clewiston Florida run by the Embry Riddle Aeronautical University. 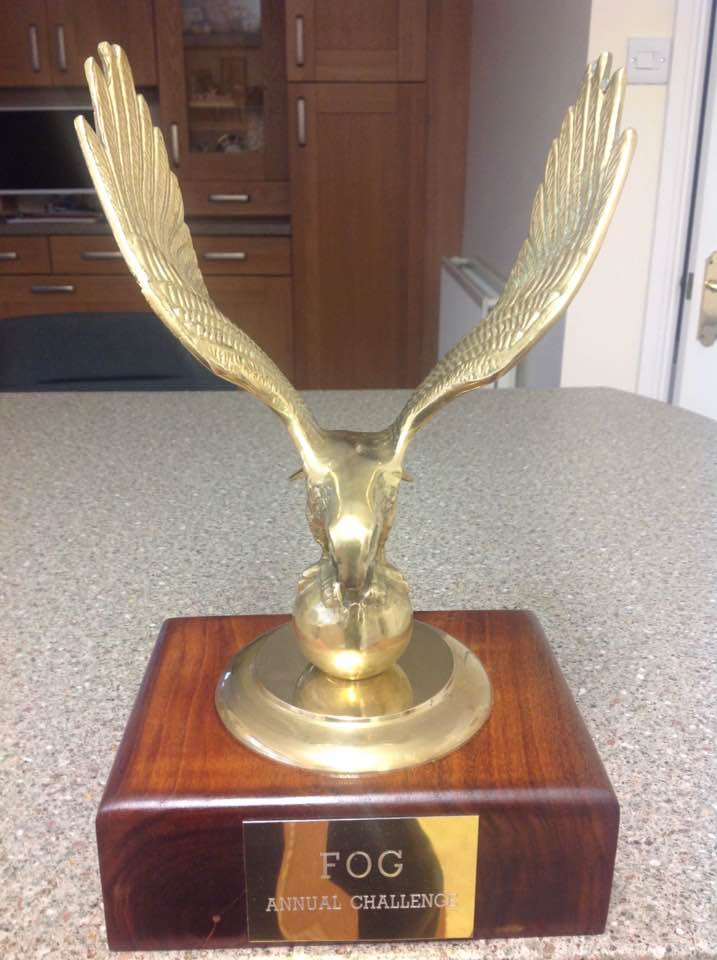 In the 1960s the British students and American staff of 5BFTS held a reunion dinner in London. Two brass table pieces were presented to 5BFTS by the owners of Embry Riddle. After dinner the brass representations of the university emblem, Ernie the Eagle, were given to the Chairman and Secretary of the 5BFTS association. This was the one presented to the Secretary Mr F.R.Charlesworth.

5BFTS Association held its last reunion dinner in 2013 before being wound up. This left Ernie without a role so he was pleased and proud to accept a new role in aviation as the FOG Annual Challenge trophy.

You can find out more about 5BFTS HERE 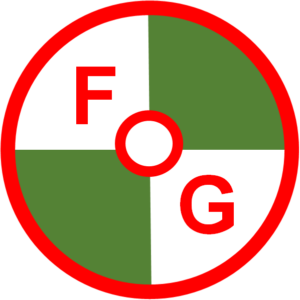